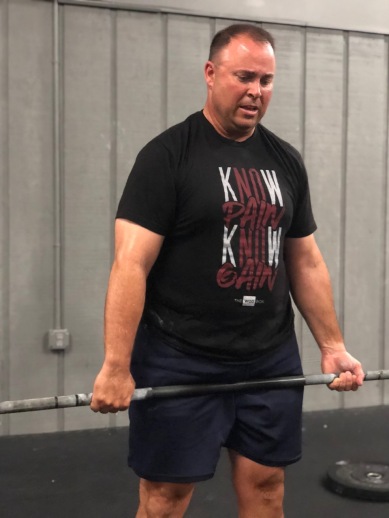 Ole Glory South’s Athlete of the Month for January goes to GP Bourg. Back in 2015 one of GP’s close friends, Lucas Lipari, convinced him and his wife, Angie, to give CrossFit a try at the former Iberia Crossfit. He recalls his first WOD involving three rounds of an 800 meter run with a medicine ball. It wasn’t until after the second round that he realized he had grabbed a 30# ball by mistake. “It was almost my first and last WOD, but decided to come back the next day and give it another try.” Glad he came back because they’ve been hooked ever since. They continued their CrossFit journey when Ole Glory South opened in New Iberia in July of 2017.

GP is a regular in our 5:00 AM class at OG South. He comes in each morning ready to crush goals with his fellow 5:00 AM badasses. He recalls one of his first goals was to master the art of double unders. He started out by doing them every other jump and eventually reached his goal of linking them together consistently. Annie (50-40-30-20-10 double unders and sit ups) has become his favorite WOD to date because of his love for double unders. He also stated he that he “really, really likes Angie!” Not sure if he was referring to the workout or his wife though.

Throughout high school GP participated in football. After graduating he began lifting weights in college. It wasn’t until years after graduating from college that GP became active again. He and his wife started attending bootcamp style classes and then eventually made the transition into CrossFit. The biggest change GP noticed since beginning CrossFit was his strength. He used to lift weights back in college, but was surprised at how much his strength had decreased over the years. Today he is stronger than ever and is currently lifting some of the same weights he was doing 30 years ago. Deadlifts would have to be GP’s favorite lift.

In GP’s non-CrossFit life he is 50 years young (youngest husband in the 5:00 AM Badasses group) and is married to Angie Bourg. Together they have three children, Megan 22, Margaret 20 and Joseph 19. He works as the Vice President of Operations for Honiron Manufacturing. His hobbies include outdoor activities such as offshore fishing and hunting. He has also coached middle school football for the past 10 years.

When asked what he enjoyed most about Ole Glory this is what he had to say, “from the very beginning I’ve enjoyed the combination of pushing/motivation from the coaches while also allowing me to set my own pace/loads that I’m comfortable with. Of course, I’ve also been blessed to have the best workout group at 5:00 AM, as well as getting the opportunity to workout with my wife each morning.”

If you or someone you know is interested in giving CrossFit a shot, here are a few words of advice from GP. “Don’t let the first day, or even the first week scare you away. There’s so much more to it than just one WOD. Stick with it and learn to take the good with the bad. Also, get to know the people in your classes. The community atmosphere is one of the key components of CrossFit, and the people you see each day will become some of your closest friends.”

“If you can’t beat them, go find someone you can beat.”